Clayden Financial’s Leigh Clayden and Martin Cornell participated in this event which saw 23 teams of local golfers, of all ages and abilities, take to the course at Ufford Park recently in support of local independent charity, Suffolk Age UK.  A regular event in the charity’s fundraising calendar, this year saw a full line-up, with regular supporters alongside many new teams.

The event was supported by Basepoint Ipswich as overall sponsors who selected Suffolk Age UK as their charity of choice for 2015-16, local party experts Let’s Party and Ufford Park Hotel, Golf & Spa.

Teams from local golf clubs and businesses enjoyed a breakfast, great golf, competitions, and dinner, followed by an auction, raffle and prize-giving supporting the charity.  Just over £6,200 was raised – all of which will go towards continued support of core services such as befriending, information and advice, benefits advice and attendance at a lunch or memory group – linking into the charity’s 2016 campaign “There’s More To Me”.

As always, there was a competitive side to the day, with trophies going to Gloria Rockliff and Matthew Stacey for the individual prizes, and Fynn’s Favourite Fore taking the prize for the Team competition.

Jo Reeder, Fundraiser for Suffolk Age UK said “We were delighted with the support for this year’s golf day, which saw us “sell out” with more teams than ever before.  This has enabled us to raise much needed funds to directly support older people in Suffolk, enabling them to feel valued, protected and supported in their later years”. 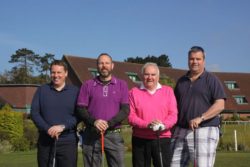